Watch Again: Are we seeing Hawking Points in the CMB Sky? by Sir Roger Penrose 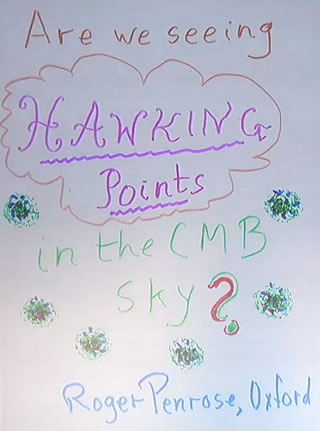 On 10th December, IEEE UK and Ireland Section was honoured to have Sir Roger Penrose deliver its 2018 annual Christmas Lecture.

Over 100 members gathered at the University of Westminster to hear introductions by Vice Chancellor, Peter Bonfield and Section Chair, Mike Hinchey before Sir Roger took to the stage.

His lecture was entitled “Are we seeing Hawking Points in the CMB Sky?” and gave a fascinating insight into his most recent work on the cosmic microwave background.

Professor Sir Roger Penrose’s work has been a major factor in understanding black holes, having been knighted in 1994 for his services to science. He has received several awards, including the 1975 Eddington Medal of the Royal Astronomical Society jointly awarded to Stephen Hawking, and the 1988 Wolf Prize for physics, shared with Hawking for the Penrose-Hawking singularity theorems.

Penrose is Emeritus Rouse Ball Professor of Mathematics at the University of Oxford and Emeritus Fellow of Wadham College, Oxford. In 2010, he reported possible evidence of an earlier universe prior to the Big Bang of our own current universe in his book Cycles of Time.

Hosting Professor Sir Roger Penrose as our Christmas Lecture speaker was a great achievement for us all, as we hosted one of the greatest scientist of modern times. It was a true honour and an inspiration to meet this living legend and to listen to his lecture from his beautifully illustrated hand drawn slides.

The event was webcast live from the Regent Street Cinema, at the University of Westminster.  If you were not able to be there in person, you can see the whole lecture below.