An IEEE PES Distinguished Lecturer Program (DLP) talk was delivered by Dr Jessica Bian, the Present-Elect of the IEEE PES, with a recent hotspot topic of “February Texas Blackouts and Grid Reliability”, on Thursday 26th August 2021. The IEEE PES SBC at University College Dublin and the IEEE PES SBC at The University of Manchester hosted this DLP talk attracted 258 registrations.

Keeping the lights on is not only a technical issue but also about many factors, such as business models, laws, regulatory policies, politics and cultures. As a pioneer of the electric industry’s reliability metrics and grid risk assessment, Dr Jessica Bian shared her views on how the tragic Texas blackout happened, illustrated with the latest available data, and potential solutions in the future.

Dr Jessica Bian briefed the history of the power industry from Thomas Edison’s 1st commercial plant to the interconnected “power pool” built by Samuel Insull then to the development of reliability concepts and regulations in the US through the blackout histories. She emphasised that to understand an event like the Texas blackout, it is very important to understand the development of the power industry, from science and technology advancement to a mature business model then to regulations restraining this profit-seeking industry. 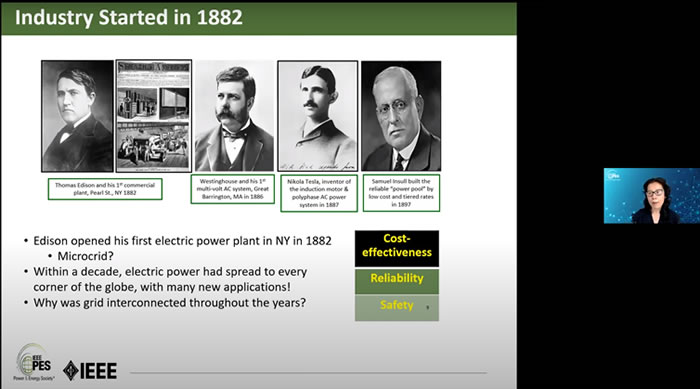 Dr Jessica Bian then introduced an important legal definition to the audience – Adequate Level of Reliability (ALR). She addressed the counter-intuitive view that the Texas power system was actually reliable because there were no instability or cascading failures and the system performed “controlled separations” by operators rather than uncontrolled separations, although the system did not withstand the test of the low-probability winter storm in February.

Through a post-mortem analysis, Dr Jessica Bian showed data from operators on how the Texas blackout was initiated, and what the network operators have responded to the incidents. She indicated a few facts that deteriorate this blackout event:

Dr Jessica Bian encouraged the audience to make a change, not only through learning, teaching and researching in academia but also by joining communities and organisations like PES, SBCs and WiP.

The organising committees would like to express sincere gratitude to Dr Jessica Bian for her informative talk. For more information, including the biography of Dr Jessica Bian and the abstract of her talk, please visit the Manchester PES SBC website