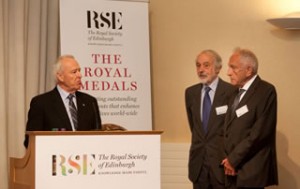 Prince William, the Duke of Cambridge, presented Philippe Dupuis and Thomas Haug with the IEEE/RSE James Clerk Maxwell Medal on 5 July in Edinburgh. The award is sponsored by the IEEE Foundation.

While working for the European Telecommunications Standards Institute, Dupuis and Haug developed the Global System for Mobile Communications (GSM), which established a policy for advancements in international mobile communications. GSM, a foundation for 3G and 4G systems, affects today’s emerging 5G standards.

Dupuis led the Franco-German cooperation program that demonstrated digital technologies were mature enough to build the GSM system. He is credited with moving the system from concept to reality.

The two men received the award for ‘leadership in the development of the first international mobile communications standard with subsequent evolution into worldwide smartphone data communication.’

IEEE and the Royal Society of Edinburgh created the Maxwell award in 2006 to recognize groundbreaking contributions that impact the development of electronics and electrical engineering or related fields. James Clerk Maxwell, a 19th-century Scottish mathematician and physicist, laid the foundations of electromagnetic wave theory, radio propagation, microwave techniques, and radio communications.

The Maxwell medal was one of the awards that were scheduled to be delivered during the annual IEEE Honors Ceremony, held on 11 May in San Francisco, but Dupuis and Haug were unable to attend. 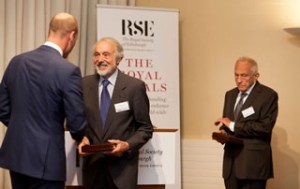 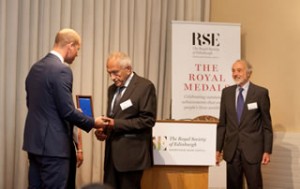 ‘Last November I felt immensely honoured to learn that, together with Thomas Haug, I would receive the 2018 Maxwell medal,’ Dupuis said. ‘I wish to thank IEEE and RSE for this great honour. During my engineering studies, I thought that the importance of the work of James Clerk Maxwell deserved to be acknowledged to a greater extent. All scientists indeed recognise that Maxwell has provided one of the most eminent contributions to the constructions of modern physics and the understanding of nature itself.’

‘I would like to thank the IEEE Awards Program and the Awards Board for this great honour,’ Haug said. ‘The award ceremony in Edinburgh was a very nice event, during which the bronze replicas were handed over to us by his royal highness, the Duke of Cambridge. The medal is just beautiful, as is the certificate.