The Section’s recent Milestone dedication at the University of Dundee is the front page lead story in the just-published June 2018 issue of IEEE Region 8 News, the Region’s quarterly glossy newsletter. 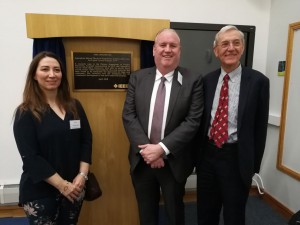 Accompanied by a gallery of photos taken at the event, the article goes on to recount the history behind the invention of amorphous silicon for TFT-LCD flat panel displays, the result of research by two senior academics, Walter Spear and Peter LeComber, in the Department of Physics at the university during the 1970s and 1980s.

The event organisers are name-checked, not least the department’s head David Keeble, who handled all the on-site logistics at the university, along with the key speakers at the technical symposium, including Ian Underwood from the University of Edinburgh and a particularly compelling star turn by Cyril Hilsum CBE.

Also featured prominently on the front page are Section chair Mike Hinchey and vice-chair Mona Ghassemian, together with IEEE President-elect José Moura, alongside the bronze Milestone plaque immediately after the unveiling.

The June 2018 issue of IEEE Region 8 News is on its way to print subscribers of IEEE Spectrum magazine.