A pioneering IEEE Fellow collects one of the Islamic world’s most prestigious science and engineering awards.

The Mustafa Prize, awarded biennially, is a top science and technology award in the field of Information Sciences and Technology and in 2017 was awarded to Professor Erol Gelenbe, from Imperial College London. 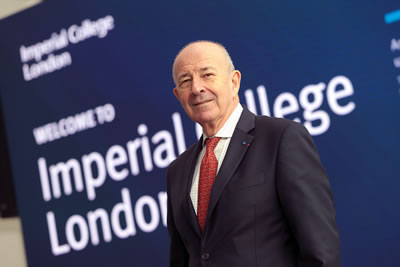 Flying to the capital of Iran – Tehran – he received $US 500,000 and a special medal and certificate in Vahdat Hall, the Opera House in Tehran, in front of some 1000 guests from all over the world.

Professor Gelenbe, from the Department of Electrical and Electronic Engineering at Imperial College, said: “I am surprised and honoured to get this award. I’ve always had a passion for fundamental research on the mathematical foundations for computer and communication systems, which lead to building better systems and improving their usage and performance, and that is what has driven me over the years, so it is nice to be honoured in this way.”

Professor Gelenbe has been a prolific researcher, publishing in excess of 360 papers through his career in Belgium, France, the USA and the UK.

He is the inventor of the eponymous G-networks or Gelenbe Networks that are the underpinning science used to evaluate the performance of computer networks, while they are controlled to ensure they function smoothly without overloading.

In one of his many breakthroughs, Professor Gelenbe invented the random neural network that closely models the spiking behaviour of natural neuronal systems together with learning algorithms for these systems.

Professor Gelenbe and his colleagues are also credited with inventing many years ago a patented multi-hop computer architecture for conveying voice and images over computer networks. He also established the theoretical underpinnings for this approach, which is now widely used in the telecommunications industry.

For some of his inventions, Professor Gelenbe and the teams he created gave up personal financial reward in exchange for distributing software freely to universities worldwide, so as to spread knowledge and social benefit.

During his long career, Professor Gelenbe has supervised over 75 PhDs who now work in Asia, Africa, Europe and the Americas. The American Mathematical Society ranks him among the top 30 most prolific PhD supervisors in the mathematical sciences. His former PhD students include many talented women researchers and academic leaders.

As part of his visit to Iran, in addition to his acceptance speech, Professor Gelenbe gave two lectures in Tehran, one at Sharif University and the other at the Graduate University for Professors called the Tarbiat Modares University.

Professor Ali Hessami, Chair of IEEE UK and Ireland Section, commented “We are proud to share Professor Gelenbe’s achievements with the rest of the IEEE membership and wish him continued success in his outstanding work.”

In 2015, the Mustafa Prize was first awarded in the field of Nano-Technology to Professor Jackie Ying, a native of Taiwan working at Singapore’s A* Institute and MIT, and to Professor Omer Yaghi from UC Berkeley’s Chemistry Department.