Skip to content
Previous Next
Section AGM at Aston University 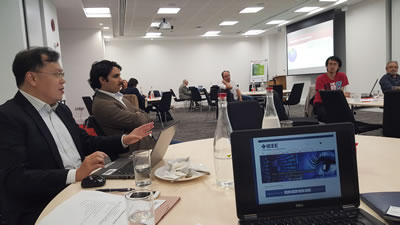 Attendees were welcomed by Professor Wen Cao of Aston University and also Chair of the Section’s Industrial Electronics Chapter.

The AGM was attended by the Chairs of the Section’s Chapters, Affinity Groups and Support Groups as well as other supporters.  Those not able to attend were able to contribute via a remote link.

The AGM provides an opportunity to review the activities of the Section as a whole as well as the individual Chapters, Affinity Groups and Support Groups.  It was noted that during the last 12 months, membership had exceeded 11,000 for the first time.  Other notable successes were the John Logie Baird IEEE Milestone Event where over 150 specially invited guests celebrated the first public demonstration of television by John Logie Baird in January 1926.

There were discussions and updates on the planned activities for the remainder of 2017 and into 2018 including the Members Open Day on 7th October at the University of Westminster.  The meeting heard about other initiatives being planned including a range of STEM and CPD resources.

It was Professor Ali Hessami’s last Section Meeting as Chair and the meeting concluded with a vote of thanks for his efforts in leading the Section over the last 2 years.

Professor Ian T Nabney, Ph.D. 50th Anniversary Professor of Systems Analytics welcomed the Section to Aston University and gave an overview of the institution’s activities, describing it as one of the UK’s research-led universities with excellent teaching quality and employability prospects.

The School of Engineering and Applied Science carries out research that is relevant to the current and future needs of society. All staff are engaged in research and with unusually large proportion of them operating research projects linked to UK industry. Research projects tackle strategic priorities such as photonic technologies, energy and power, data science and ICT technologies. 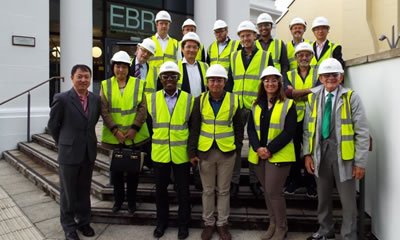 EBRI is creating and inspiring the next generation of bioenergy researchers and business professionals. We are proactive in creating opportunities for young researchers and PhD students to work directly with businesses so that industry is able to benefit from the latest thinking and findings within the research and academic fields of bioenergy.

EBRI has seven laboratories including two industrial laboratories to allow EBRI to work with businesses to tackle industry issues. It means that EBRI is able to offer a full cycle – analytical scale research through to semi-industrial demonstrator level. Each laboratory is dedicated to a different area of research and includes: algae, catalysis, high pressure processing and upgrading of fuels, thermal processing of biomass and waste materials, and the characterisation of novel biofuels. These laboratories are available for feedstock, power and equipment tests.

The EBRI building is powered by innovative technology developed by its researchers and contains the first Pyroformer™/Gasifier demonstration (0.5MW) power plant. The plant is able to provide the heat, electricity and cooling needed to power the building and also part of the Aston University campus.