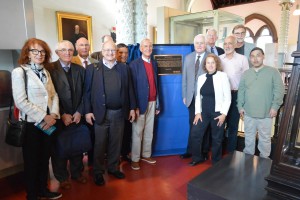 The LMAG Committee has continued to prepare nominations for IEEE Milestones, following the highly successful event organised by Peter Grant from Edinburgh University, at the Hunterian Museum  in Glasgow.

The most recent nomination to be approved by the IEEE History Committee is for Active Shielding of Superconducting Magnets. Rod Muttram has been working closely with Siemens to complete the necessary preliminaries before the details of the unveiling ceremony can be finalised. Following the approval by the History Committee the casting and shipping of the plaque, engraved with its citation, will be ordered from the foundry in the USA. The unveiling is likely to take place around Easter 2020 at the Siemens factory at Enysham, Oxon. This will be followed by a technical symposium featuring the background history to the invention and future developments of superconducting magnet technology. Further details will become available in early 2020.

The next proposal to go to the IEEE History Committee, currently being prepared by Charles Turner and Roland Saam, will commemorate the invention and development of the Computer-Assisted Tomography X-Ray Scanner (CT scanner) by EMI Electronics.

There are also several ‘live’ proposals in the pipeline, including the J. Lyons Company LEO Computer, the work of Charles Kao on Optical Fibres, and the Virtual Memory work at Manchester.

The Committee welcomes inputs from interested members who would like to participate in these projects, or to propose other subjects for Milestone nominations. The IEEE History Committee website gives further details about the procedures for nominating advances in electronics and related fields. The LMAG Committee would be pleased to assist in the preparation of nominations.