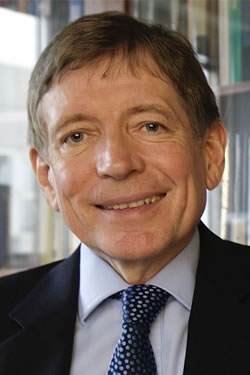 Thomas Brazil received his Bachelor of Engineering degree in Electrical Engineering with First Class Honours from University College Dublin (UDC) in 1973, and received his Ph.D. degree in 1977 from the National University of Ireland. He subsequently worked on microwave sub-system development at Plessey Research (Caswell) from 1977 to 1979. After a year as a lecturer in the Department of Electronic Engineering, University of Birmingham, he returned to UCD in 1980, where he served as professor and head of Electronic Engineering. Brazil was an elected representative of the Professors of the University on its Governing Authority and worked in several areas of science policy, both nationally and on behalf of the European Union.

He was elected an IEEE Fellow in 2003 and was IEEE MTT-S Worldwide Distinguished Lecturer in Microwave CAD from 1999-2003. Brazil was elected a member of the Royal Irish Academy (RIA) in 2004; election to the RIA is Ireland’s highest academic honour. He served as secretary of the RIA from 2009 to 2013 and was a member of the RIA Council. He acted as chair to both the European Microwave Conference in 2006 and the European Microwave Integrated Circuits Conference in 2016. Following election by world-wide ballot in August 2010, he became a serving member of Administrative Committee of the IEEE MTT-S and in October 2016, Brazil was elected president of the MTT-S in 2018. He was serving as President-Elect of the MTT-S in 2017 and President from January 2018.

The Memorials Committee is planning to recognise Professor Brazil and his contributions to the Society at IMS2018.