IEEE Milestone Plaque Awarded to the UK and Ireland Section 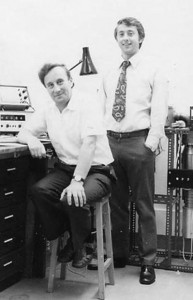 On Thursday April 5th 2018 the IEEE Milestone plaque awarded to the Physics Department at Dundee University will be unveiled by the IEEE President-elect, Jose Moura. The award commemorates the work of Walter Spear and Peter LeComber in the fabrication of amorphous silicon thin film field-effect transistors for the switching of flat panel liquid crystal displays.

In the late 1970s and early 1980s, Spear and LeComber had discovered that amorphous silicon layers could be produced on large area glass substrates, and that integrated thin film field-effect transistors capable of switching liquid crystal cells could provide the means to enable flat panel displays to be possible. The award of the IEEE Milestone plaque is the first international recognition of their seminal contribution to television technology.

The proposals in each of these cases were submitted for approval to the IEEE History Center by the Committee of the UK & Ireland Life Member Affinity Group (LMAG) based in London.   Other proposals currently being investigated by the Committee include the LEO Computer, the EMI CAT Scanner, and the first Superconducting Magnet. Any members interested in contributing to this work are invited to get in touch.